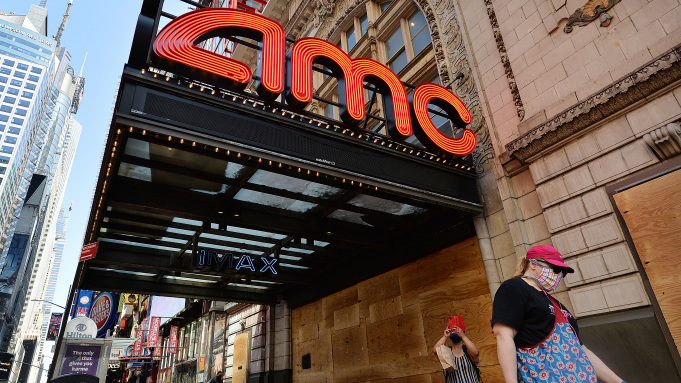 AMC Entertainment shares have more than doubled this week with a 45% surge — and still rising — on Thursday that catapulted the exhibitor past a $12 billion market capitalization. Retail traders on social media swore they’d keep buying, and not sell.

AMC CEO Adam Aron has said that more than 3 million individual investors, many Redditors and Robin Hood traders, now own the majority of the stock since Wanda Group sold the last of its holdings this month. He’s actively embraced them: “They own AMC. We work for them. I work for them,” he said during a May 7 conference call.

Wall Street analysts who try to correlate stock price with a company’s fundamental business and prospects have been left in the dust. Most have either neutral — like a hold — or sell ratings on the stock. Eric Wold, who follows the sector for B Riley Securities, on Wednesday downgraded AMC to neutral from buy on valuation as the stock blew past his $16 price target. He’d recently boosted the target to $13 on an upbeat combo of continued global box office reopening and recovery momentum, additional studio windowing agreements and debt reduction.

Plus, the holiday weekend is upon us with A Quiet Place Part II and Cruella hitting theaters. So some of the stock’s movement is on promising fundamentals. They pushed Cinemark and Imax up today by 3.5% and 4.4%, respectively.

AMC, however, is a bona fide meme stock — a category that didn’t really exist before January, when retail traders on social media and investing chatrooms egged each other on to pile into GameStop, AMC and a handful of others. The shares have bounced around since, but AMC saw a sharp uptick this week, with #AMCStrong trending, along with #AMCSqueeze and #AMCtothemoon. AMC, Ford and Boeing are the top three gainers on the market today.

“I can’t rationalize it,” said Wold.

The first round of retail buyers wanted to slam short sellers – investors, often hedge funds — who bet a stock will fall. Then it was #SaveAMC, driven by retail traders who know and like the brand. In fact, the soaring stock price enabled the financially struggling chain raise to decent cash by selling shares – which was much harder when AMC was trading at, say, its 52-week low of $1.91.

“They’ve raised all the equity they can,” said Wold.

“DO NOT SELL!!! They CANNOT stop this unless you sell. JUST HOLD!!!” read one post on StockTwits, a messaging platform for traders.”$AMC remember WE own the float!! WE name the price !!! Hodl!!!” read another.